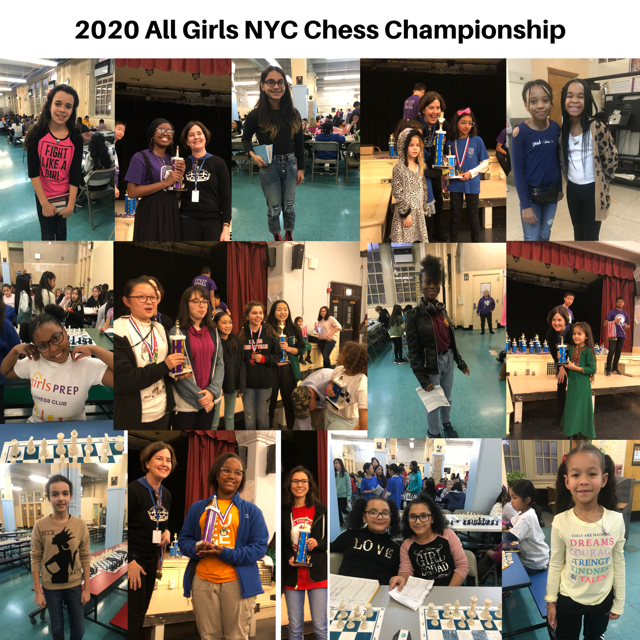 On Saturday, March 7, 2020 Chess in the Schools held the All Girls NYC Chess Championship, a popular annual city-wide competition that brought together more than 400 girls who were able to play, compete, grow, and learn before the COVID-19 pandemic made New York City shut down schools and cancel all public events.

For over 33 years, Chess in the Schools has helped transform the lives of more than half a million low-income children – including hundreds of thousands of girls – using chess instruction as a tool to foster their academic and social skills, confidence, and self-esteem, and enabling them to succeed and lead productive and fulfilling lives. 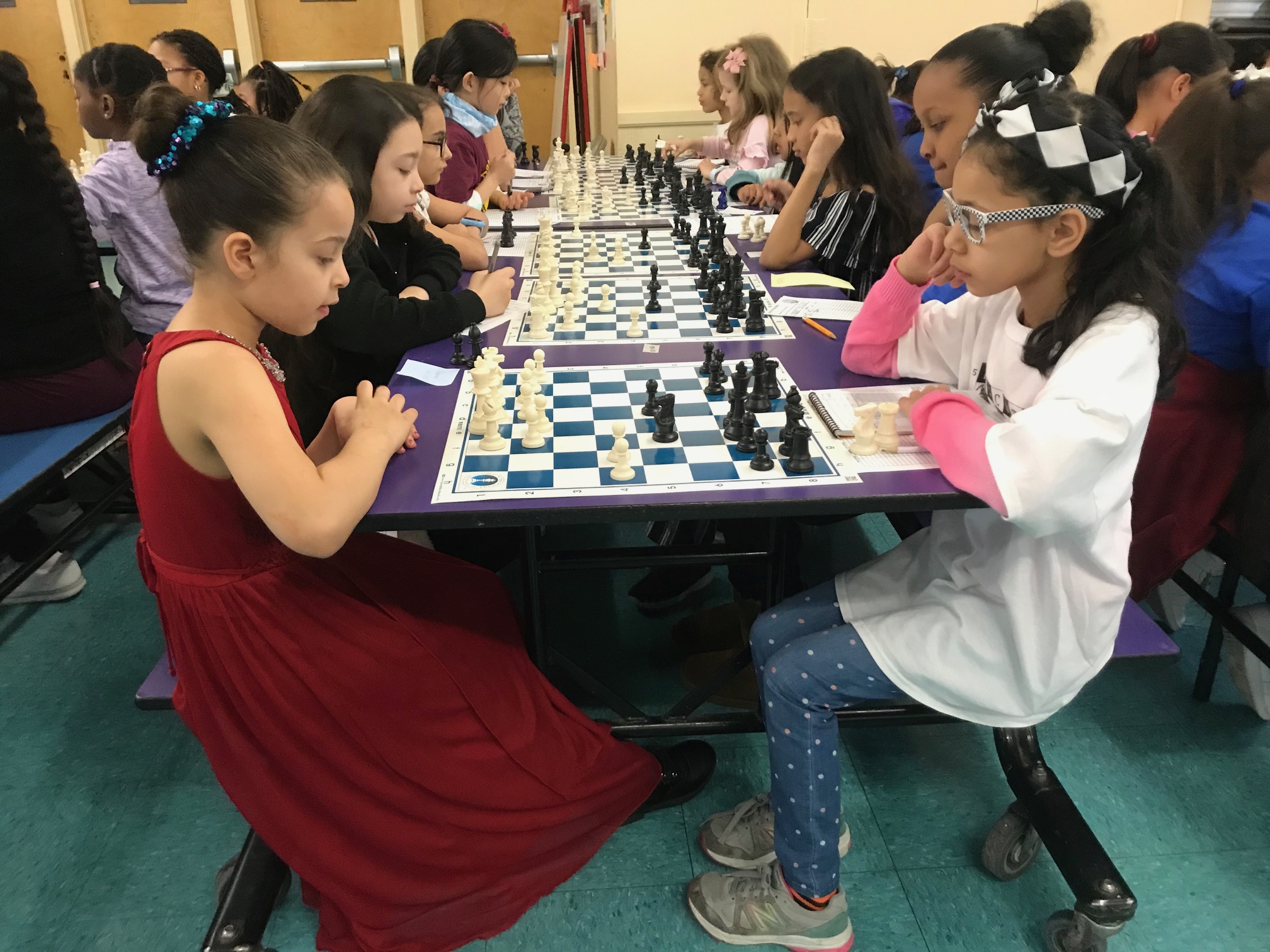 With no physical limitations to participation and competition, girls often lack the educational opportunity, support, and role models they need and deserve. Chess education provides our female students with a tool to develop the analytical and strategic abilities that serve them during their school years and beyond. Realizing that girls and women are significantly underrepresented in chess at all levels, CIS aims to empower more young female chess players through all of its programs conducted in schools and afterschool, with its efforts culminating annually in the all-girls citywide tournament.

More than 400 female students, as young as 4 years and up to 18 years of age, from over 50 schools representing all five boroughs, packed the school cafeteria for the 2020 All Girls NYC Chess Championship, which took place on March 7, 2020, at P.S. 11M, a public school in the Chelsea neighborhood of Manhattan. The event began with check-in at 8:30 am, followed by the four rounds of the game. 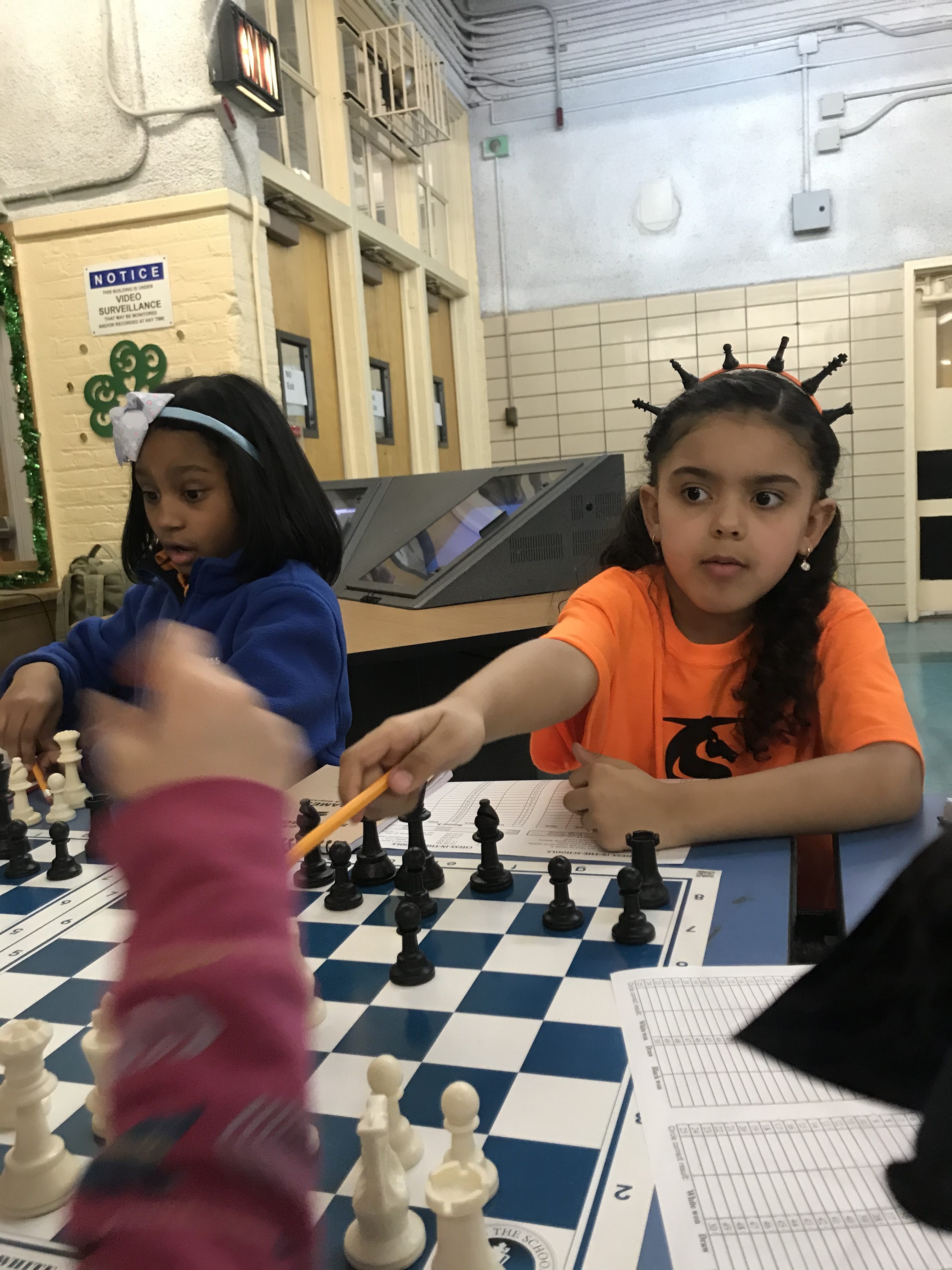 Being in the same room with hundreds of young girls – so quiet that you could hear a pin drop, all of their faces solemn, intent, and entirely focused on the game they are playing – was indeed an unforgettable experience. The concentration in the cafeteria was in marked contrast to the backstage environment, where the players were brimming with excitement, some singing and even dancing – a group of girls as diverse as New York City itself.  Many of them dressed in favorite outfits and t-shirts with empowering slogans like “Girls Rock.” We are delighted to report that this year a team of reporters representing New York magazine organized a special photo-shoot for the tournament participants. The photos will appear in the magazine’s Look Book commemorating Women’s History Month, slated for publication this spring. 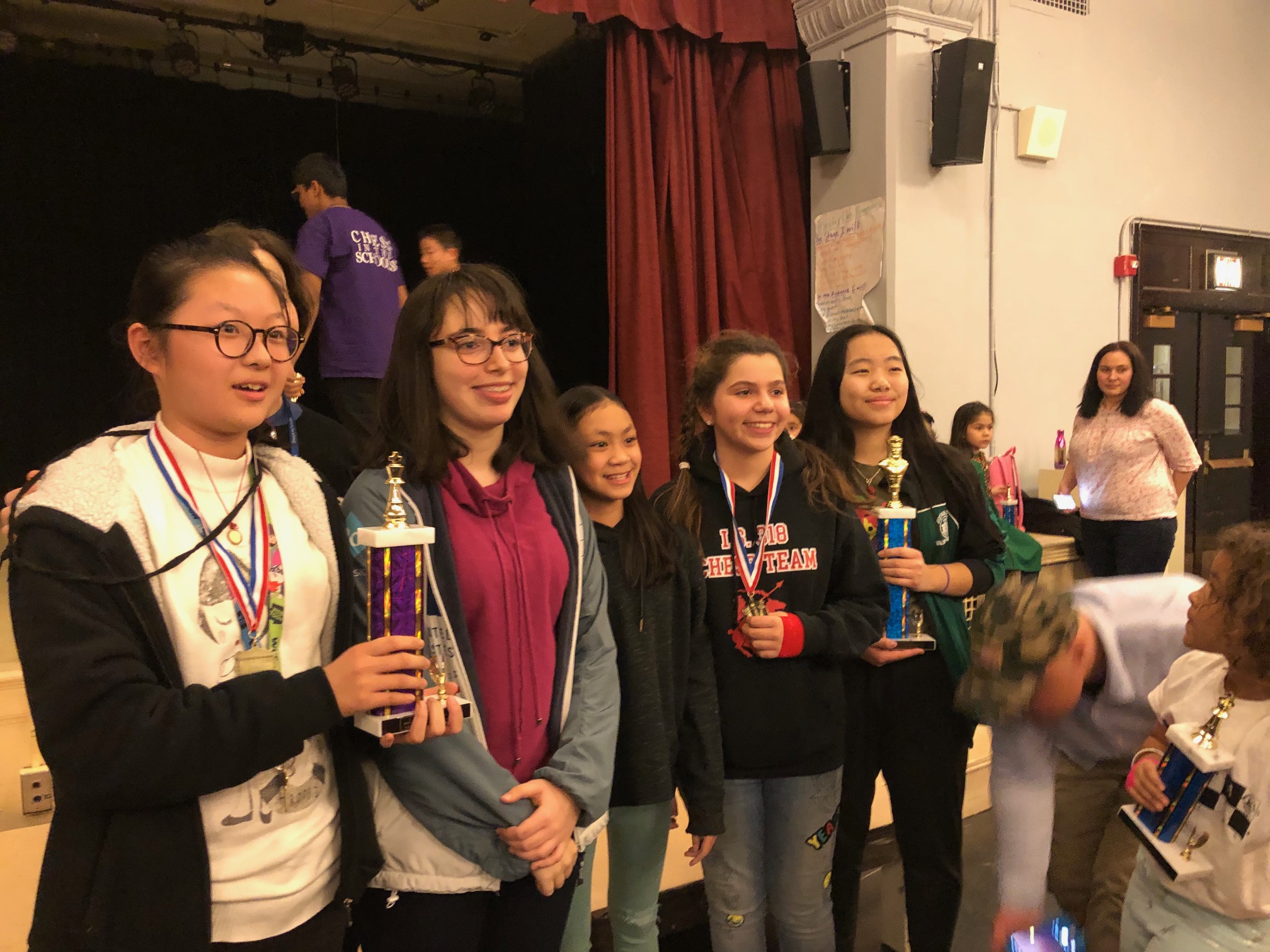 Players were divided into sections based on their grade level and ratings, including novice and unrated status. Each game was 30 minutes, and when using time delay, players were required to deduct 5 minutes from their starting times. The scores were measured in two ways:  as individuals and as teams. This bilateral method ensured that not only did each player do her best, but that they worked together as a group. The importance of team building and sportsmanship, which are among the cornerstones of CIS’s teaching and programs, were thus underscored and reinforced.

Each team of girls came with its own coach, with whom they have already established relationships and rapport and were thus able to benefit from personalized coaching in game strategy and morale boosts.  CIS assigned a specific space for each team in classrooms throughout the building, a safe haven where they met throughout the day. 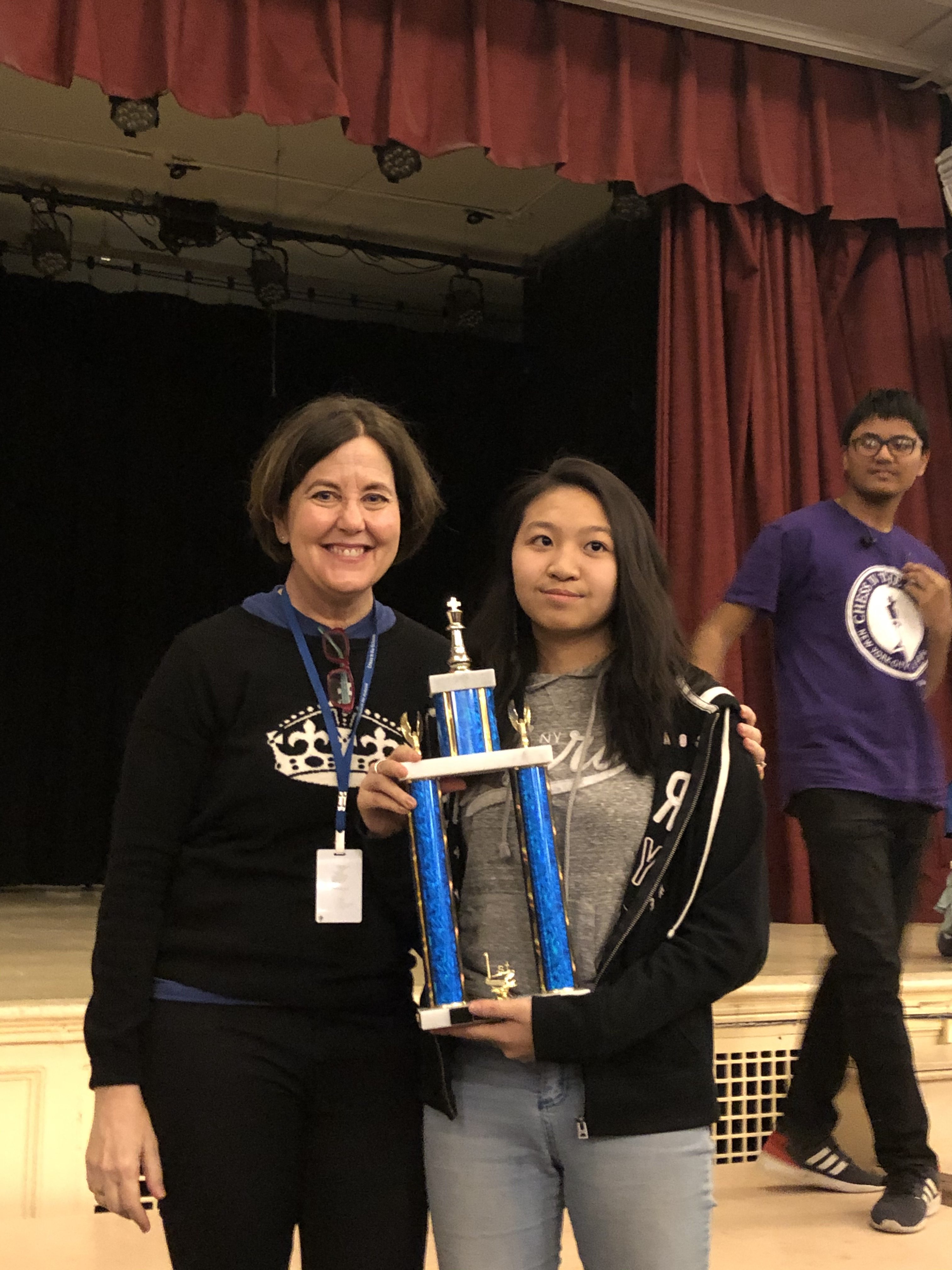 TThe four rounds of the tournament took the entire morning and the early afternoon, culminating in the emotional and uplifting awards ceremony, where individual players as well as teams with the highest scores in each category were honored. Trophies were given to the top players and teams in each section. Students scoring three points or more who had not won a trophy were awarded a medal.

The complete list of results and rules can be found on the CIS event page for the tournament.

The event was managed by 10 Chess in the Schools staff members along with 21 high school students employed by CIS as part-time assistant tournament directors. As part of our integrated continuum of programming, we offer the award-winning College Bound program to guide and support low-income high school students in career exploration and preparation for post-secondary education, including these part-time employment opportunities.

Taking into account the growing concern with the spread of COVID-19, CIS staff took extra measures to ensure that all participants and their family members stayed healthy and followed basic rules of personal hygiene. In advance of the tournament, bottles of hand sanitizer were purchased and distributed among CIS instructors and staff members. During the tournament, all participants and their chaperones were encouraged and reminded to wash hands with soap (several sinks were available at the cafeteria in addition to bathrooms on each floor) and to use the sanitizer which was placed at visible locations inside and outside the main play area.

The generosity of our funders – the J & K Pi Family Foundation, the US Chess Federation, and STL Chess Club – has been instrumental in helping Chess in the Schools organize this special tournament and engage over 400 female students representing all corners of New York City. Thanks to events like this, our young chess players have a chance to receive the support and encouragement they need to aspire and to compete, in a safe and friendly environment.

I remember the first All Girls Tournament that Chess in the Schools had. At the time I was in eighth grade and I was ecstatic. At the tournament there weren’t a lot of girls playing at that time; we had half the cafeteria filled with all girls. Now I’m in eleventh grade and on Saturday when I saw how filled the cafeteria was at P.S.11, I was surprised. I saw a lot of people that I haven’t seen in a while and also played them again and their skill has improved tremendously. So, I want to thank the people who sponsored the girls’ tournament this year and Chess in the Schools for holding the tournament.

Vincent Bogert, a school teacher who brought his team to the All Girls Tournament

The day starts out like most others. Kids who get up at 6:00 on Saturday are always a little subdued. After round one things start to blossom and we see things that we don’t normally see at tournaments. Our girls gather in the hall, not to sit but to get active. Singing, chanting and cheering become the order of the day. I noticed lots of girls from other schools coming over and sharing. Some spirit in the girls seems to be freed when they have their own tournament. They end up creating what they all agree is the best tournament of the year.

Oksana Korneeva, a parent of a participant (translated from Russian)

My daughter is 9 years old. There is no serious chess instruction at the public school she attends. This is why, since she was six she’s been playing chess at a chess club, to develop perseverance, attention and logic. She is a very good student now and I believe that chess has really helped her in this. She did participate in chess tournaments before, at the chess club, and even won trophies. That prompted us to try her luck in a big tournament. The 2020 All Girls NYC Chess Championship at PS 11M became our first experience. We were very worried that the tournament could be cancelled but it was not and we were very happy. We were also worried about various trifles but the organizers have provided the children will everything necessary for a comfortable play. The parents were waiting for their children nearby. Our daughter has won two games and lost two games. Had smiles and tears. At the sad moment of losing, the support from the CIS staff was really helpful to my daughter! Although she did not receive a medal we all got much more – the experience and understanding of how such a tournament runs. We do hope to play better next time and do hope that this next time will happen very soon. Moreover, my daughter has received her first US Chess Federation rating! We are very proud for her! Thank you to all organizers for being so fast with processing results! We do hope that chess will come to our school. There are many gifted children at the school; they want to play chess but they do not have an opportunity yet. 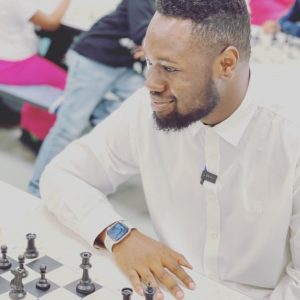