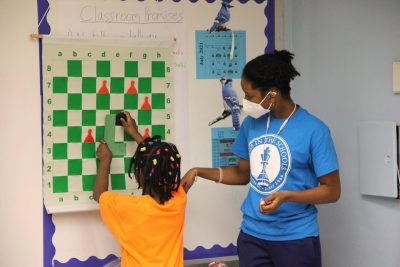 The Andy Lerner Excellence in Chess Education Award is given annually to one educator representing a public or charter school or a non-commercial children’s chess club. The selection process is open and nationwide.

Five finalists are selected by an award panel of educators and public figures well-known in the chess world. Four runners-up are also recognized.

The $10,000 award includes a monetary award of $5,000 to the educator and another $5,000 to their school or chess club. The remaining four finalists receive a $2,000 award each, shared between the finalist and their chess program.

Who can be nominated for the award?

Candidates are expected to:

The following candidates are disqualified from applying:

The following criteria that will be used to select finalists:

Who can make nominations?

Anyone who is in a position to be familiar with the impact that the candidate has made on their students and their program. It can be a school principal, a senior school administrator, a PTA board member, a supporter of a non-profit chess club or another person in a similar role.

Step One. A nominator submits an online nomination form to Chess in the Schools. The deadline is December 1, 2022. If the nominator wants to recommend several candidates, they should submit separate applications for each candidate.

Step Two. Chess in the Schools checks candidates’ eligibility, and invites them to submit an application form and additional materials. The deadline to submit applications is January 15, 2023.

Step Four. The winners are announced during the awards ceremony in New York City in May 2023 (date TBD)

This Award is made possible thanks to a generous gift from Andrew Lerner, CIS’s esteemed Board Member.

If you have questions regarding this award, please contact development@chessintheschools.org