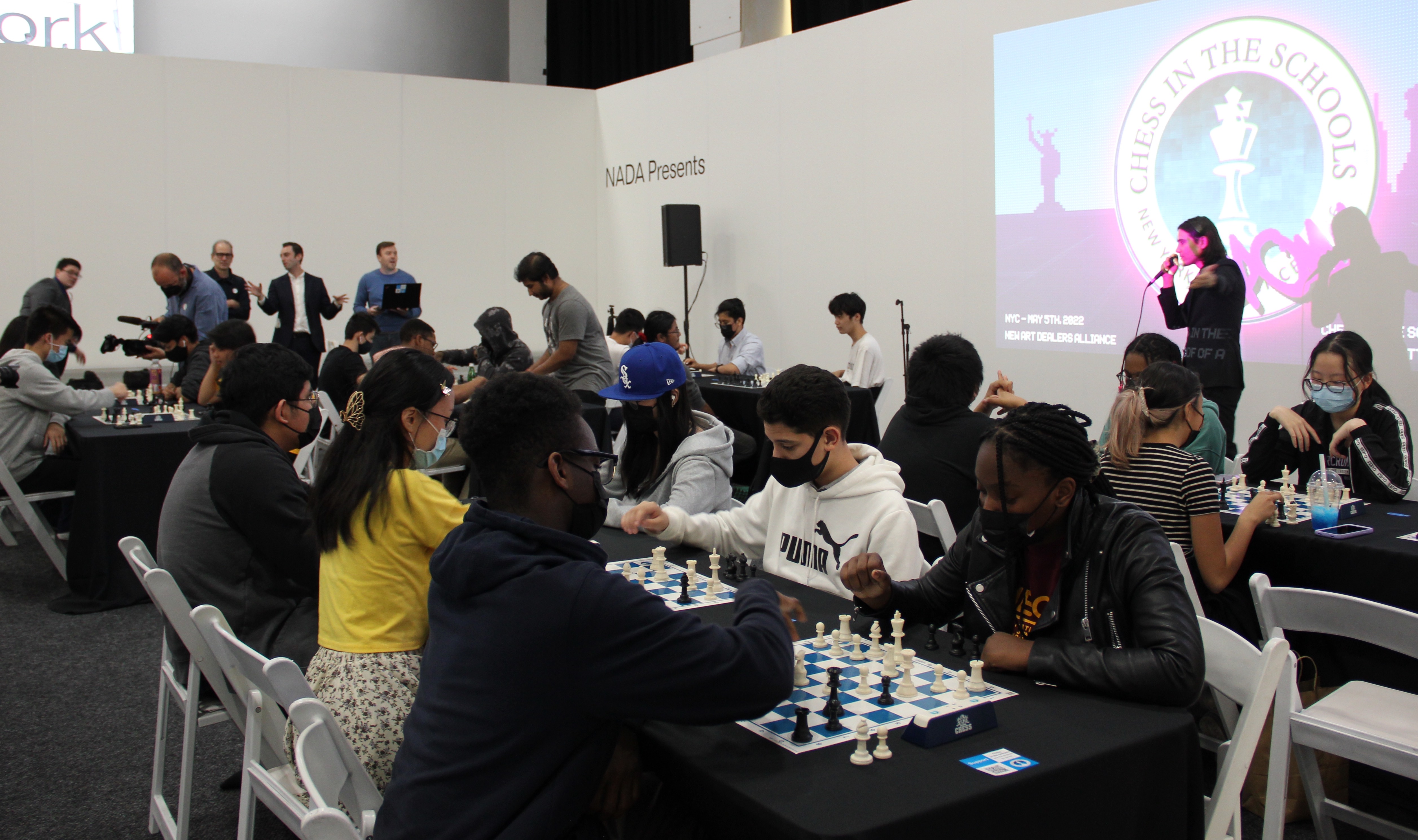 On May 8, 2022, Chess in the Schools students had a unique opportunity to participate in a chess challenge at NADA New York, an international arts fair by the New Art Dealers Alliance that featured 120 galleries spanning 37 cities and 18 countries. 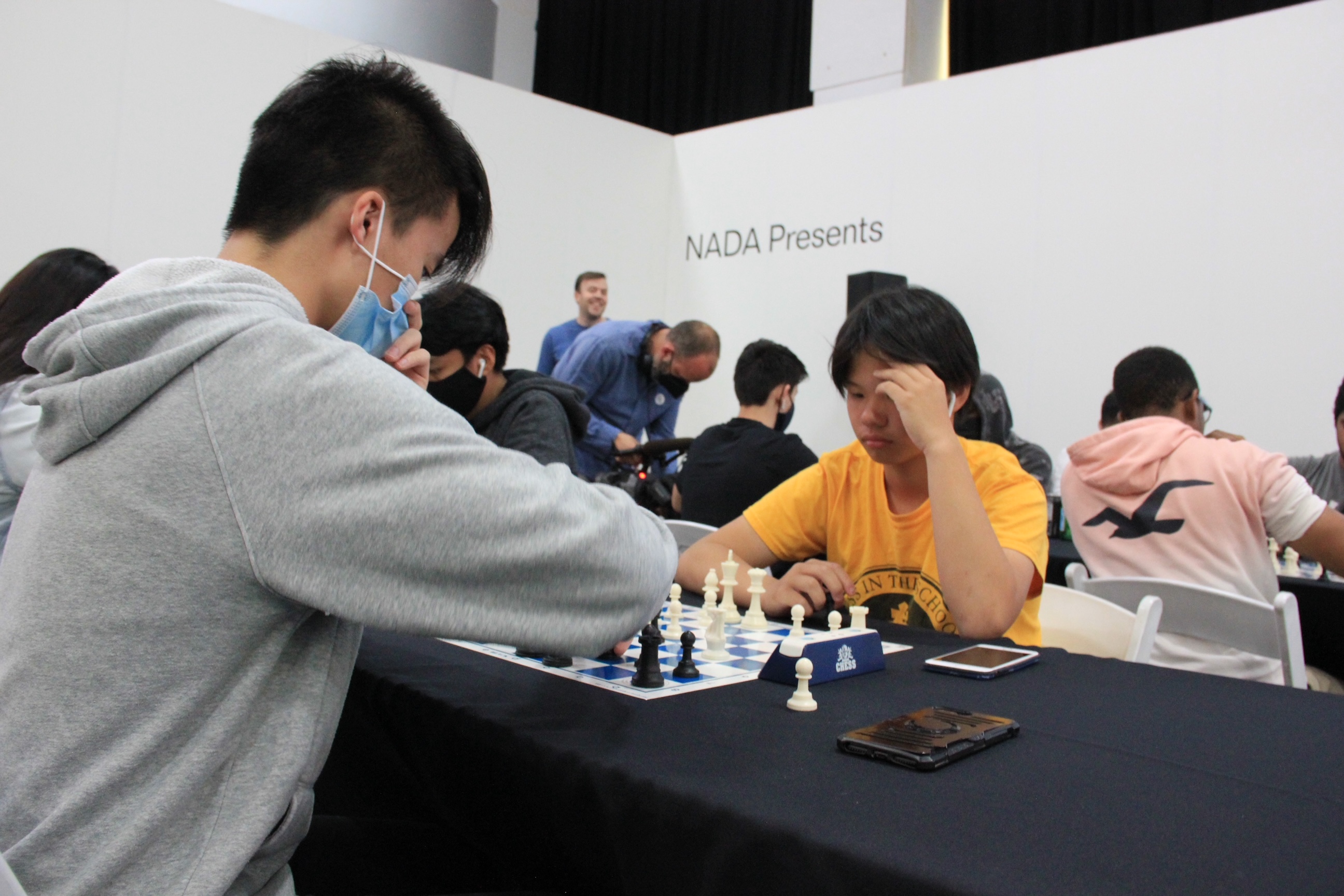 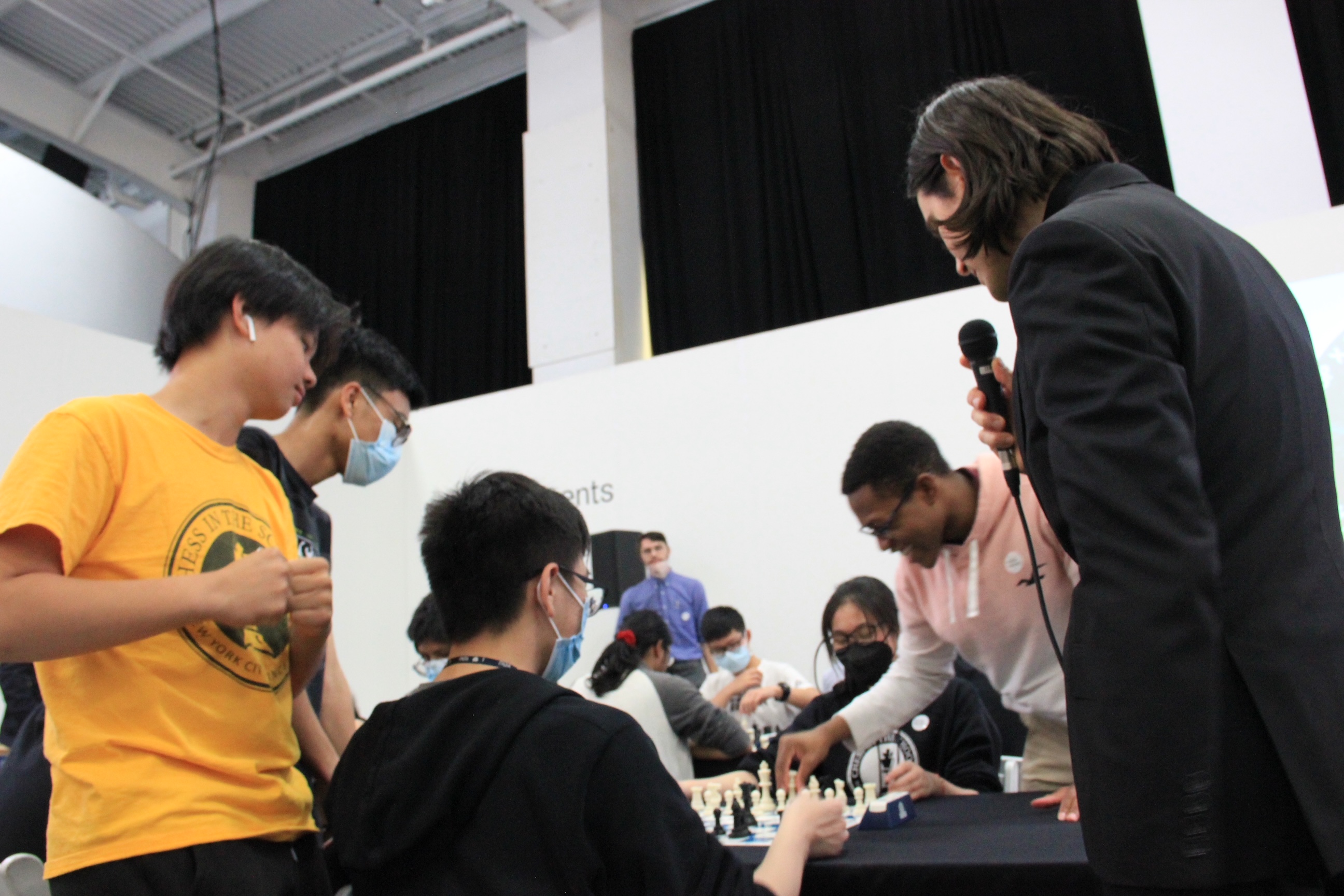 Surrounded by contemporary art, our high schoolers enjoyed bantering with the performance artist Peter LaBier while playing seven rounds of blitz chess. After the tournament, Vlad Smolkin, the gallerist who presented CIS at the fair along with reps from Play Magnus, gave a special tour for the students who were interested in learning more about the art exhibits and introduced them to other gallerists and presenters. 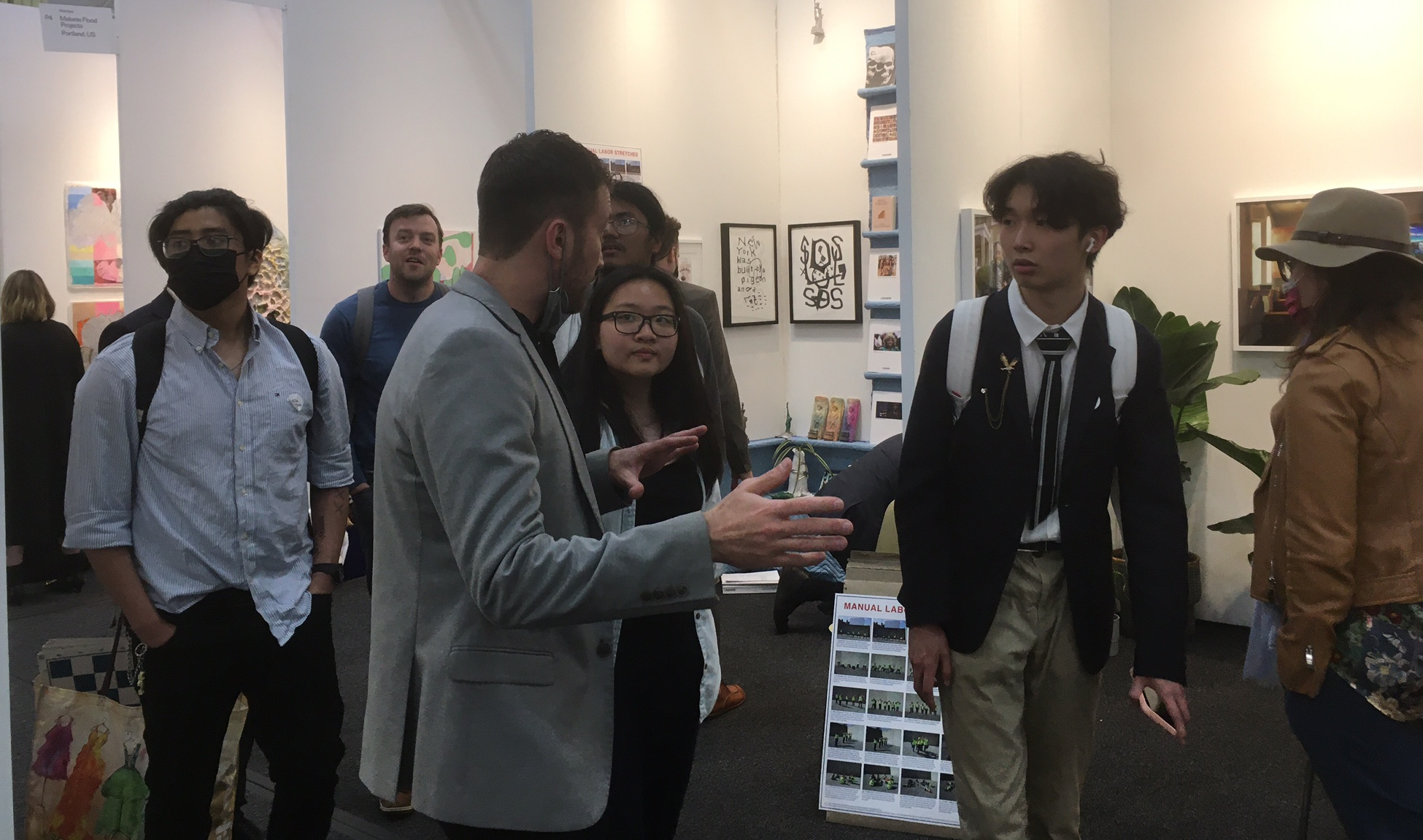 On Sunday, two students returned to play in the simuls with IM Dmitri Schneider and GM Pascal Charbonneau.

Vionnie Khong, one of students, shared her impressions about the events:

“The high school chess tournament was twenty-four friends going head-to-head against each other in five-minute blitz matches for seven rounds. Peter’s commentary of the entire tournament made the energy much more lively, and invited the players to banter more comfortably. My favorite memories from the tournament were catching my opponents with sneaky tactics found in seconds to them missing that their kings were in danger. We laugh about these moments of mistakes and cherish the experience of being able to play and banter in this environment.” 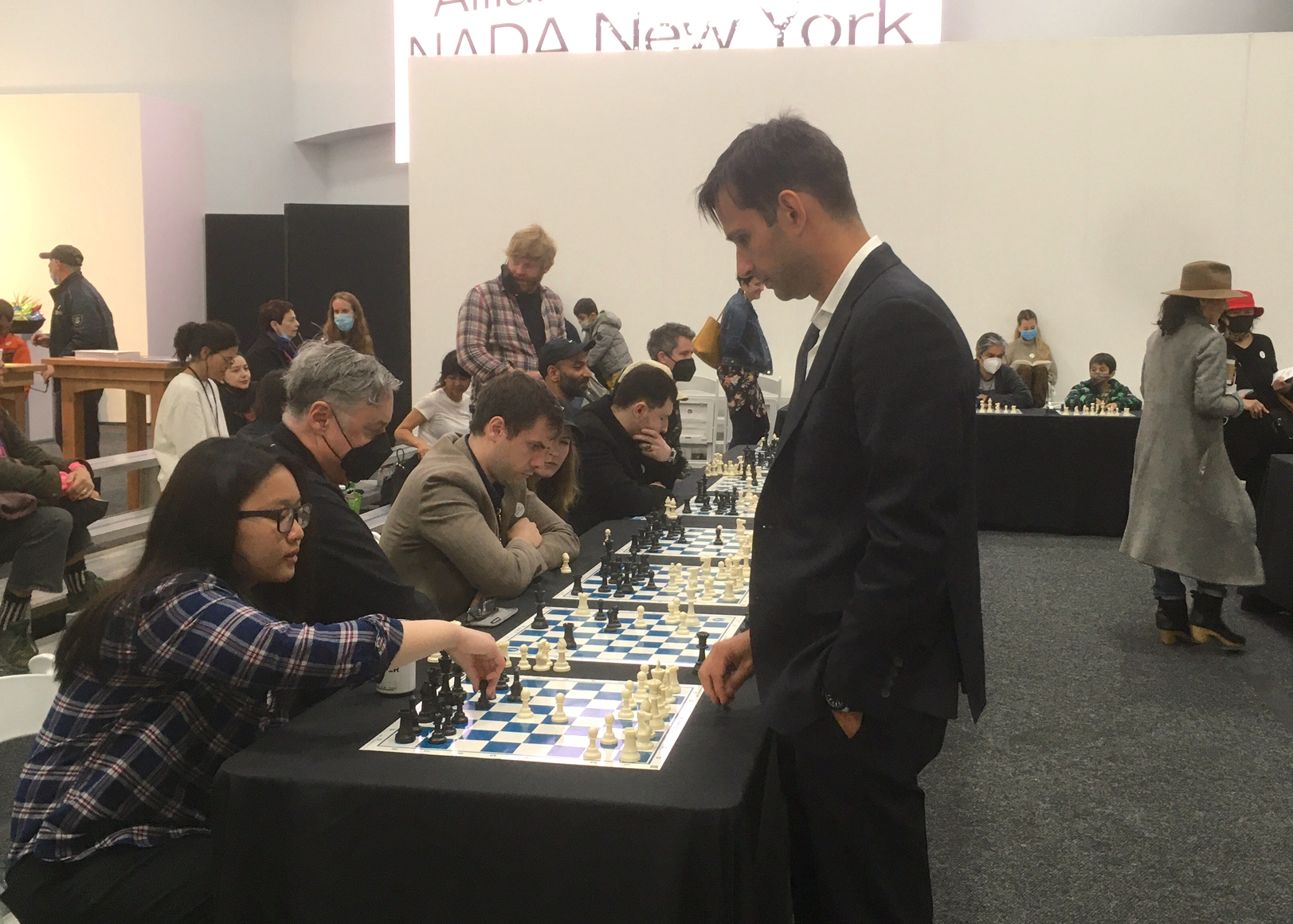 “On Sunday, I walked to the same place I did days ago, but suddenly the environment was different. Almost everyone I saw was an unfamiliar face, but we all had one united goal — to survive as long as we could against Dimitri or Pascal. With every move the masters made, participants winced at their mistakes and the dreaded checkmates were looming around. We all made mistakes which Pascal and Dimitri saw through, immediately. Everyone was stone-cold through their games deep in concentration. Peter was the only one who could break our silence.”